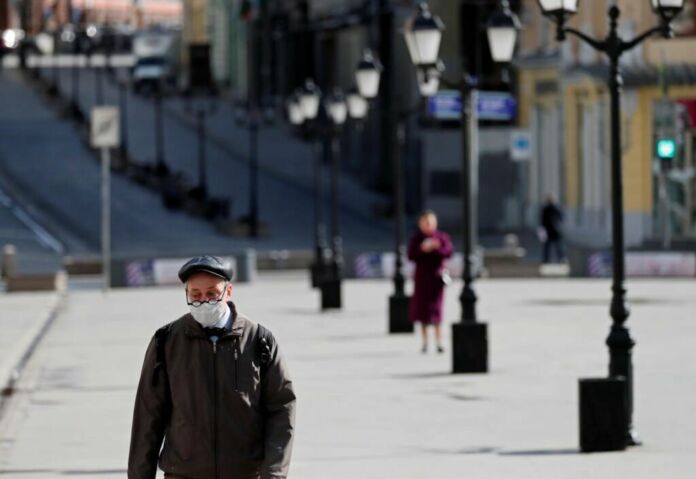 MOSCOW — The Kremlin said on Saturday a “huge influx” of coronavirus patients was beginning to put a strain on hospitals in Moscow as Russia’s death toll rose to more than 100.

Moscow and many other regions have been in lockdown for nearly two weeks to stem the contagion, but hospitals in the capital are still being pushed to their limit, officials said.

On Saturday, a Reuters witness saw a tailback of dozens of ambulances queuing outside a hospital handling coronavirus cases in the region immediately outside Moscow, waiting to drop off patients.

One ambulance driver said he had been waiting 15 hours outside the hospital to drop off a patient suspected of having the virus.

“The situation in both Moscow and St. Petersburg, but mostly in Moscow, is quite tense because the number of sick people is growing,” Kremlin Spokesman Dmitry Peskov said in an interview on state television, Russian news agencies reported.

“There is a huge influx of patients. We are seeing hospitals in Moscow working extremely intensely, in heroic, emergency mode.”

Russia’s coronavirus crisis response centre said hospitals were taking all possible measures to ensure rapid admissions and that cases of ambulances needing to wait hours to drop off patients was not a systemic issue.

Russia has reported 13,584 cases of the virus, and the authorities said on Saturday that 12 new coronavirus-related deaths in the last day had pushed the death toll to 106.

Peskov added that it would become clearer only in the next few weeks whether the country was nearing the worst point in its outbreak.

Sergei Sobyanin, the mayor of Moscow, said on Friday that the city was far from reaching the peak of the outbreak, saying it was merely in its “foothills”.

On Saturday he said Moscow would introduce digital permits next week to control movement around the city to help enforce the lockdown.

He said residents will have to request the permits, which will contain a code that identifies the holder, in order to travel using motorcycles, scooters, cars, taxi services or the city’s vast public transport network.

Sobyanin added that residents should be ready to present identification documents and their digital permit to law enforcement officers patrolling the city.

“Unfortunately this is a necessity,” Sobyanin wrote on his website. “It is needed to protect the lives and health of many Muscovites, to overcome this calamity and to return to normal life.”

A stronger police presence was visible on the streets of Moscow. Traffic police had set up check points on major thoroughfares on the outskirts of the city but were not systematically carrying out checks.

In the early stages epidemic, Russia recorded fewer cases of the new coronavirus than many Western European countries, but its tally began to rise sharply this month.

Until late March officials were saying the situation was under control and that there was no epidemic in the country.