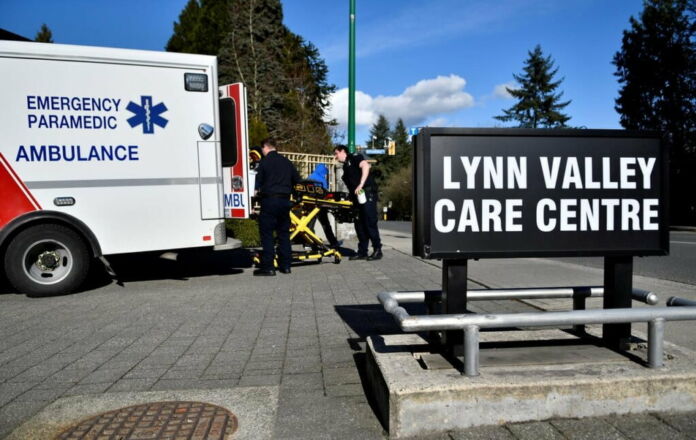 TORONTO/MONTREAL — With deaths in nursing homes making up almost half of Canada’s coronavirus deaths, provinces are taking control of their workforces, boosting care workers’ wages and redeploying health inspectors from hospitals to curb the virus’ spread among seniors.

In one Ontario home, more than a third of residents, 27 people, have died since March 25 and more than half its staff have tested positive for the coronavirus as a shortage of personal protective equipment (PPE) hit workers.

In Quebec, 60% of deaths have been in either seniors’ homes or long-term care facilities and a quarter of the province’s nursing homes have at least one confirmed case, according to provincial data.

Residents in nursing homes and long-term care facilities are particularly vulnerable to COVID-19, the respiratory disease caused by the novel coronavirus, because of typically more compromised immune systems, frailty and sharing common areas. Frequent visitors and workers from outside compound the situation.

“Other people inadvertently may transmit the infection, and this is where the problem is. Oftentimes it is the vectoring from outside the home into the home,” said Dr. Roger Wong, a clinical professor of geriatric medicine at the University of British Columbia.

In British Columbia, where 68% of provincial deaths have been in nursing homes, the virus is spreading through different residences as low-paid care workers supplement their income by working in multiple homes.

The province’s medical officer of health enacted strict restrictions on who could visit long-term care facilities, limited employees to work in only one home at a time and canceled patient transfers between facilities.

In Alberta, where 56% of deaths are in care homes, employees who work in multiple seniors’ homes are required to inform their supervisors if they work at a facility where there has been a confirmed or suspected case, among other measures.

Ontario, Canada’s most-populous province, has issued an emergency order that provides long-term care homes more flexibility in staffing and recruitment, bypassing collective bargaining agreements that limit who can be hired and the use of volunteers, and redeployed inspectors to provide additional help.

“What we’re seeing happening to our seniors and in our long-term care homes … is hard to process, it’s hard to comprehend and it’s hard to deal with,” Ontario Premier Doug Ford told reporters.

‘War zone’ in some homes

The Ontario order will take some pressure off workers who say there has not been enough staff to provide proper care for residents, especially in an outbreak, said Miranda Ferrier, president of the Ontario Personal Support Workers Association.

“They are absolutely desperate for help. It is a war zone in some of these long-term care homes,” Ferrier said.

“Our hope with this emergency order is that people will be hired to help with things like snack carts, feeding, laundry, assisting [personal support workers] where they can.”

Frontline workers have warned of inadequate protective equipment in some long-term care facilities in Quebec, which has become Canada’s epicenter for the pandemic with 9,340 positive cases.

A Quebec nursing home worker told Reuters she was buying her own face shield because the home she works at does not provide equipment due to an absence of positive tests.

Speaking on condition of anonymity, the worker said she had dealt with two residents who were sick and awaiting COVID-19 test results.

Faced with staffing shortages, Quebec raised wages for most health workers by 4% to 8% and said on Tuesday it would deploy more nurses and doctors to care homes.

“If the virus is not going to get you, the stress will.”

Trump says North Carolina voters should vote twice; once by mail, once in person

Healthy dog ‘buried alive’ digs himself out of grave and walks to road for...