How Trump allies have organized and promoted anti-lockdown protests 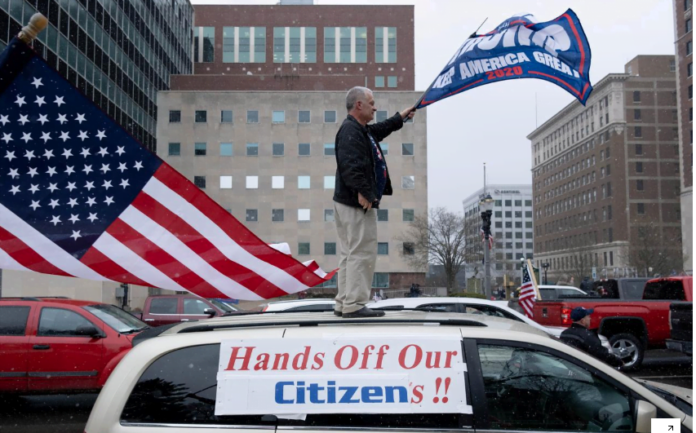 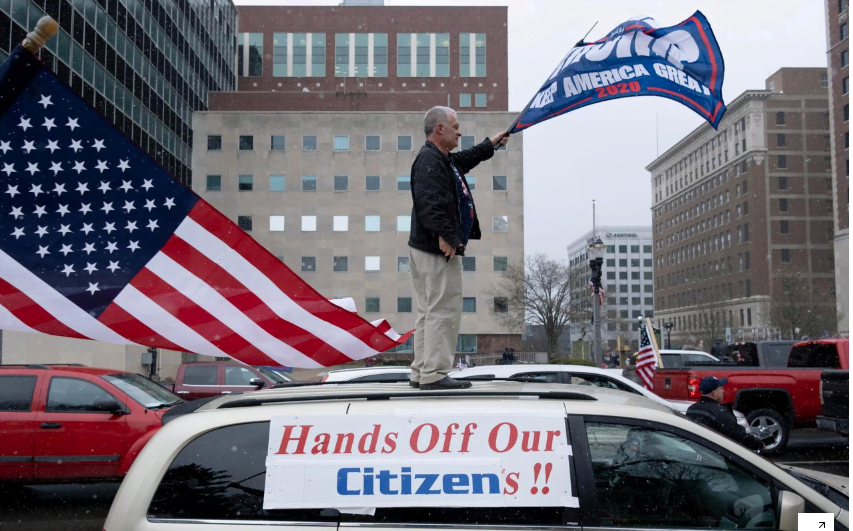 FILE PHOTO: Supporters of the Michigan Conservative Coalition protest against the state’s extended stay-at-home order, amid the spread of the coronavirus disease (COVID-19), at the Capitol building in Lansing, Michigan, U.S. April 15, 2020. REUTERS/Seth Herald/File Photo

In Michigan, the organizers of last week’s rally against Democratic Governor Gretchen Whitmer’s stay-at-home order aimed at combating the coronavirus pandemic are involved in the Republican president’s re-election effort, a Reuters review of their profiles and interviews with them show.

In other swing states, such as Pennsylvania, Wisconsin and North Carolina, Republican lawmakers, party leaders and Trump allies encouraged their social media followers to join the protests, often organized by conservative activists and pro-gun- rights groups, and attended the events themselves.

Their actions contradict the Trump administration’s recommendations for a slow and phased reopening, as well as warnings from its own medical experts that opening the economy too fast risks a resurgence of the novel coronavirus that has infected almost 810,000 people in the United States and killed over 45,000 – the world’s highest number of cases and deaths.

A bipartisan majority of Americans – 88% of Democrats and 55% of Republicans – also want to continue to shelter in place despite the impact on the economy, according to a Reuters/Ipsos poll released on Tuesday.

Regardless, many Trump supporters saw his criticism of Democratic governors for going too far with economic restrictions, and his recent tweets calling for those states to be “liberated,” as endorsing their cause, protest organizers and Republican officials said.

They said there had been no communication with the Trump administration or his election campaign over the protests.

The Trump campaign declined to answer whether it had been involved with the protests, referring instead to Trump’s daily coronavirus briefings in which he has expressed sympathy for the protesters, saying he understands their frustration.

Several of the main organizers of the Lansing, Michigan, protest that police estimated drew about 4,000 people have ties to the Trump campaign, and are deeply involved in state Republican politics.

Among them is Meshawn Maddock, who sits on the national advisory board of Women for Trump 2020, an organizing and fundraising arm of Trump’s re-election.

Maddock, whose Twitter profile pictures her with Trump and also says she is a co-chair of his campaign in Michigan, said the Trump campaign had given her no messaging and she was only acting in her capacity as a concerned citizen.

Marian Sheridan, who was a founder of Michigan Trump Republicans and serves as the grassroots vice chair for Michigan’s Republican Party, was also involved in organizing the protest.

She described the protest as an apolitical backlash to Whitmer’s guidance, seen as one of the strictest in the country. Whitmer is widely seen as a possible running mate for presumptive Democratic presidential nominee Joe Biden in November’s election.

“You see the people with the Trump signs, but people shouldn’t just jump to conclusions that these are only Republicans out there. Everyone is being so hurt by this,” Sheridan said.

Chris Gustafson, the Trump campaign’s Michigan spokesman, reiterated that neither the Republican National Committee nor Trump’s national campaign had any role in the Michigan protest.

‘HE ALONE CAN FIX ECONOMY’

Still, the Trump campaign has seized on the anti-shutdown backlash to drive new talking points on the economy: Democrats are killing small businesses, while Trump is the only leader able to both fix the coronavirus-ravaged economy and slow down the pandemic, emails sent by Trump campaign aides show.

After running more than 4,000 Facebook ads in January and February touting a strong economy, Trump has not mentioned the economy in a new ad since March 3, according to a Reuters analysis of ad data gathered by researchers at New York University, as jobless claims surged and stocks tumbled.

A Trump campaign pollster, who asked not to be identified, said the current economic picture was bleak but could favor Trump.

“Voters won’t hold him accountable for the collapse – and they shouldn’t – and he is best suited to make the argument that he can bring the economy back,” the pollster said.

In Wisconsin, a state Trump won by less than a percentage point in 2016, Stephen Moore, a member of Trump’s council to reopen the economy and an outside economic adviser to the president, urged people to join an anti-shutdown rally planned for Friday, in a video posted on YouTube last week.

Mark Jefferson, chairman of the Wisconsin Republican Party, said voters would look fondly at Trump’s efforts to reopen the economy when they go to the polls in November.

“The messaging for Republicans is becoming clear for the election: Voters are going to appreciate a president concerned about their economic health as well as their physical health,” Jefferson said.

“We’re going to make sure voters hold them accountable for their recklessness this November and beyond,” said Jessica Post, the group’s president.

Organizers say their rallies are non-partisan. But with many wearing Trump 2020 hats and waving his campaign flags, they look and sound like Trump’s signature campaign rallies.

Matthew Bellis, one of the Harrisburg protest organizers, said politicians were smart to recognize and tap into their anger.

“If Trump supports us, we are happy to have his support, though we are not seeking it,” said Bellis. “In fact, I think politicians are taking cues from us, not the other way around.”

How Safe Is Permanent Makeup?

How Can Wellbeing Assist Us In Rehabilitation From Illness

Six Suggestions To Decrease The Risk Of Cancer