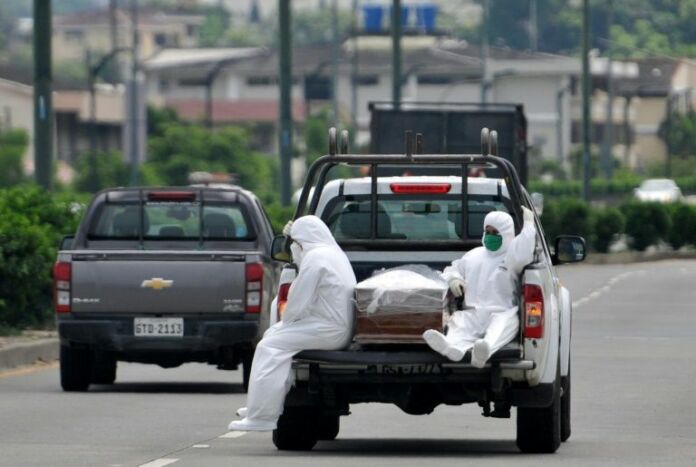 Guayaquil (Ecuador) — A fetid smell seeps out when an official dressed in full virus protection gear steps out of the door to the Los Ceibos hospital in Guayaquil, Ecuador.

Standing before him as he reads names from a list is a crowd of around 15 people wearing face masks and hoping their wait is over.

It’s an emotional scene. Some break down in tears as at last, after several days, they discover the body of their deceased loved one will be released.

But for Isabel Hernandez, a 43-year-old mother of three, the wait is not over.

“I last saw him when he was put on tubes, which was Friday” last week, she told AFP.

Her husband died on Sunday morning of the COVID-19 disease.

Although a small country of 17.5 million people, Ecuador is the third worst-hit nation from the virus in Latin America, with nearly 5,000 cases and 272 deaths.

Guayaquil, the largest city, is the center of the country’s outbreak.

Hernandez took two days to acquire the documentation she needs to release her husband’s body.

Amongst those was a death certificate that, due to the coronavirus outbreak, can now be downloaded from the internet.

A queue of cars topped by coffins forms in front of Los Ceibos.

Hernandez is hoping her husband’s hearse will have arrived by the time the official with the list next appears.

“What I want is to take my husband away from here,” she said through sobs.

She’s afraid the body will be taken to a government-supplied niche, which she views as little more than a mass grave.

For weeks, bodies were accumulating in homes following the collapse of the mortuary system, semi-paralyzed by Guayaquil’s curfew.

The treatment of the dead has led to many Ecuadorans losing trust in the government, which has set up a special force to recover bodies from homes, although no-one knows just how many there might be.

Waiting for the dead

The port city of Guayaquil, with almost 2.7 million inhabitants, is the capital of Guayas province, which has reported 68 percent of Ecuador’s coronavirus cases.

Authorities say the worst is yet to come. Guayaquil is already overrun by the crisis.

In Los Ceibos, the city’s largest hospital, the crisis is worsening.

On the other side of the hospital, people in face masks wait, seemingly oblivious to the government’s social distancing rules.

Many are getting impatient sitting in seats provided by the hospital; they’ve been waiting for days for news.

Marlene Rivadeneira, an unemployed 53-year-old, is hoping for a miracle to save her 60-year-old sister Isabel, who was taken to the emergency room on Sunday directly from her prison cell where she was serving a five-year sentence over a traffic accident.

She arrived at Los Ceibos with COVID-19 symptoms that subsequently worsened.

“I don’t know if she is going mad because she’s seeing a lot of dead people,” said Rivadeneira, who spoke to her sister by cellphone before her condition worsened.

“She’s in the emergency room and that’s where the critical ones are. She says they’re not taking care of her but they are giving her oxygen.”

She said that while waiting she’s seen at least 10 dead people brought out.

On March 19 Los Ceibos canceled doctor’s appointments and moved out its most stable patients. Its 600 beds and 91 intensive care units are now dedicated to COVID-19 patients.

Guayaquil’s healthcare system is under intense pressure with hundreds of patients waiting in corridors and many doctors and nurses off work due to illness.

The government says at least 417 health workers have contracted the virus.

In Guayas alone, 54 doctors have died since the outbreak of the virus, some directly affected and others indirectly because they couldn’t receive treatment for other ailments.

Pablo Matamoros, 51 and unemployed, took his mother to hospital on Sunday after having tried two other establishments that didn’t have oxygen.

His 72-year-old mother tested positive for the coronavirus in Los Ceibos and the level of oxygen in her blood is low.

“The doctor told me… what could happen. Now they’re going to fix her up to a tube,” said Matamoros.

Why is There So Much Zinc in Spinach?

Hormonal Acne: The Unexpected Cause of Your Breakouts

Makeup: Are Toxic Ingredients Lurking in Your Lipstick?